I remember back in the early 2000s, Hotel dinner shows consisted of Dancing Moko Jumbies and a man that chewed glass, laid down on the glass, and walked on glass lit on fire.   Then in 2010 that all changed when Kiki Mason introduced fire dancing to our world of entertainment.   The Pickled Greek Restaurant was the first official performance of Kiki’s fire dancing.   Before that, she’d only performed at a friend’s wedding.   The following year she debuted the troupe “Kiki and the Flaming Gypsies at the Comanche Mill Stage during a Triathalon Jump Up and the rest is history.

Kiki reflects back on her journey to fire dancing. 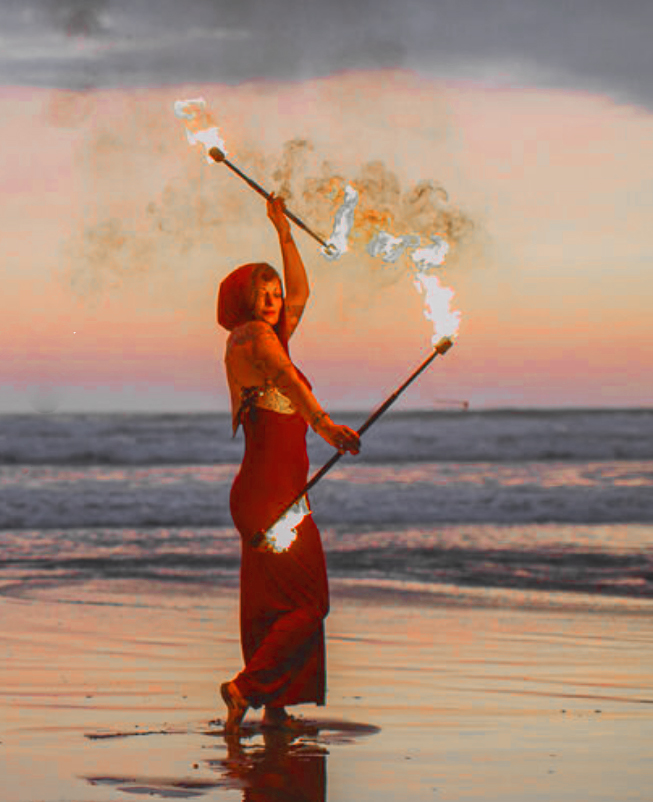 They then started using fire, and to her surprise, she realized she had a parallelizing fear of fire. From that point on, she struggled with overcoming her fear, but eventually, after a year and a half, Kiki started becoming less fearful and better at fire dancing. During that time, she moved to St. Croix in 2009 and started dancing. Now as a yearly pilgrimage, she goes back to Costa Rica for retreats or fire dancing festivals. Kiki is a very approachable person and a great teacher. So if you are interested in learning or experiencing fire dancing as a healing art form for personal practicing or group performances, you can visit her villa (Villa Larimar) on the north shore on St. Croix. She is actually holding a retreat from Dec. 1 through Dec. 6 called “Shine Your Light Retreat“. You can also contact Kiki at (340) 201-2225 and visit her website. www.ignitefirekeepers.com or www.ombodiedwellness.com.